The following is the remarkable opening passage to Rabbi Sherwin T. Wine’s conspicuously truthful, wonderfully written book: A Provocative People: A Secular History of the Jews.

This eleven-paragraph extract has been reproduced with permission. The full prologue can be read here at the International Institute for Secular Humanistic Judaism. The book can be purchased here and here, and you can watch Rabbi Adam Chalom discussing Rabbi Wine (who sadly died in 2007) and this work here.

A Provocative People: A Secular History of the Jews

“Once upon a time there was a man called Abraham. He lived in Chaldea near the city of Ur. One day a god called Yahweh came to him and told him to leave. Abraham listened to Yahweh and left. He moved to Haran in Mesopotamia and from there to the land of the Canaanites. Being a rich shepherd, he traveled with many servants. In Canaan, Yahweh promised the land to him and to his descendants. Abraham promised to obey Yahweh in all things. When his wife, Sarah, bore him a son, Isaac, at the age of ninety, Abraham was very happy. Isaac in turn fathered Esau and Jacob. With the double name of Jacob and Israel, Jacob in turn fathered twelve sons. From these twelve sons came the entire people of Israel, also known as the Hebrews.

Jacob and his twelve sons went down into Egypt. In time they were enslaved by a wicked king. After four hundred years Yahweh decided to rescue them. He chose a Hebrew named Moses to lead them back to Canaan. Two million strong, the Hebrews departed Egypt to march to the Promised Land. Along the way they stopped at Yahweh’s mountain, Mount Sinai. There Yahweh gave them rules and regulations to live by. After forty years they reached Canaan. Moses died. His successor, Joshua, led the Hebrews across the Jordan River and conquered the land in one fell swoop. The Hebrews settled down on the land and began to worship the gods of Canaan. An angry Yahweh punished them with disunity and enemies. The worst enemy was the Philistines. In time, the Hebrews united under the shepherd king David, defeated the Philistines and became an independent nation. 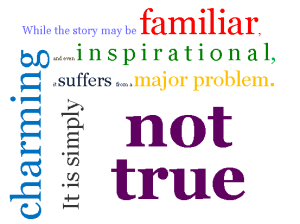 While the story may be familiar, charming and even inspirational, it suffers from a major problem. It is simply not true. There is no evidence—beyond the text of the Bible—that most of these events took place, or that most of these people really existed.

If I tell you a story about a man named Uncle Sam who had fifty children named Massachusetts, Virginia, Missouri, California… you would laugh at the absurdity of the tale. But when a similar story appears in the Bible about Abraham, who is described as the ancestor of many nations, millions of people abandon their reason and embrace its credibility. Biblical tales are not so much descriptions of real events as they are propaganda for political and religious arguments which took place many centuries after the presumed events took place. If they have historical value, it is because they are clues to what was going on in Jewish life at the time the author of the story lived. The story of Abraham has less to do with 1800 BCE, when Abraham presumably lived, than with 700 BCE when his story was created.

Biblical mythology revolves around the central figure of Yahweh, a god whose devotees claim that he is the only God worthy of the name. In the biblical narrative, Yahweh precedes the Jewish people and is responsible for their formation through his covenant treaty with Abraham. He continues to manage the Jewish experience through thick and thin. Even when the Jews misbehave, he does not abandon them. According to the biblical writers, Yahweh and the Jewish people have been together from the beginning of Jewish history.

But, in reality, Yahweh, as a popular God, did not show up until much later. Even when Moses and David appeared, it seems that they spent much of their religious time with many gods other than Yahweh. The same is true of their Israelite contemporaries. The early history of Israel is a time of comfortable polytheism in which the life of the Hebrew shepherd and farmer was tied up with the gods of the Canaanites and other Semitic neighbors. Yahweh was around, but he was competing with other members of the pantheon for Jewish attention. The Hebrews were as yet unaware of an exclusive intimacy.

For almost five hundred years, the Jews grew up as a nation without Yahweh at the center. More important to their early story was the place where they lived, the neighbors they had and their own struggle for survival. The Jews, like all other people, have a human context for their birth.

Mythology is the story of the gods. If you believe that the gods intervene actively in human affairs, then mixing mythology with history is a valid enterprise. But if you do not, the mixing becomes an obstacle to the discovery of truth.

What would Jewish history be like if the mythology were fully dismissed? Over the last two hundred years many scholars have attempted to deal with the Jews as a natural phenomenon. Some of them were Bible critics, some of them were secular historians, some of them were archeologists — all of them were united by their commitment to science as the best method for the discovery of the truth. Science simply means responsibility to the evidence of controlled investigation. Supernatural powers, supernatural beings and supernatural purposes have no place in the scientific perspective.

Over the last two centuries a great deal of evidence has been accumulated to create an alternative Jewish story. The origins of the Jewish people, the origins of the Bible, the evolution of priestly Judaism, the development of Talmudic Judaism, the realities of Hellenistic Jews, the emergence of antisemitism, the adaptation of the Jews to the Christian and Muslim worlds—all of these important chapters in Jewish history which have been distorted by the lenses of mythology and theological apologetics—now have alternative stories. In some ways the new alternatives are less romantic because the gods have been reduced to ideas in human minds and their passionate and whimsical agendas are absent from the tale. In other ways the new stories are more interesting and exciting because they are not merely the repetition of familiar religious doctrine. Flesh and blood people of the narrative are no longer the passive victims of divine manipulation, but rather the authors and creators of the events themselves…

As you will see, the narrative that follows is a very different history of the Jews.”