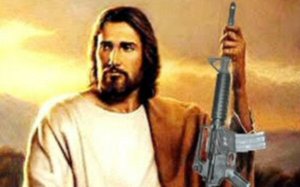 Being a True Christian™ is not easy. The captains of Judaism have abandoned them by publically conceding the fountainhead of Christianity – the Pentateuch – is simple mythology, nothing in the geographic, biological or cosmological domains support their wild supernatural claims, and the New Testament is such a mess of anonymous nonsense that just defending its outrageous absurdities and fabulous contradictions has become a career unto itself. Now imagine the scale of the problem staring the True Christian™ in the face when you also love loathe Jesus and positively adore hate the Bible? This, self-evidently, is no ordinary dilemma, yet the headache is as simple to explain as it is ghastly: Jesus was a smoking Liberal. We’re told he raged against the monied elite and their distorted market practices, was an advocate for universal healthcare, albeit of the supernatural kind, espoused kindness and charity to the poor, and, although not necessarily a progressive quality, promoted pacifism through forgiveness. Nice stuff, unless you’re a True Christian™ like Conservapedia founder Andy-most of Jesus’ parables were free market parables-Schlafly. Schlafly, a homeschooled lawyer, anti-vaccine campaigner and Tea Party recruiter, and his merry Young Earth Creationist cohorts at The Trustworthy Encyclopaedia detest this Jesus because he’s not, apparently, the real Jesus. The real Jesus, the Republican Jesus®, was a dyed in the wool, Ayn-greed is a virtue-Rand Conservative; the begotten son of God who sojourned to earth to champion Dick Cheney-style opportunism with a pouch filled with Libertarian Magic Dust. 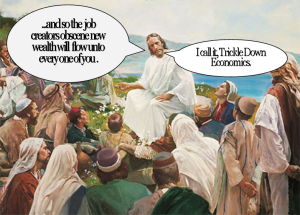 Now, the contradiction between the True Christian™ Republican Jesus® and the Jesus of the gospels is, evidently, rather pronounced, but in Schlafly’s well-oiled mind this is wholly due to the fact that Liberals and feminists have corrupted the bible, layering their socially conscious, rainbow encrusted deceit like the convoluted strata of a puff pastry apple Danish; reshaping the real Republican Jesus® into some limp-wristed,  sandal wearing androgynous hippy, while distorting his true Conservative message of the pursuit of rational self-interest in an unregulated free market. To demonstrate this Schlafly points to Luke 16:8 where the “master commended the dishonest manager because he had acted shrewdly.” Shrewd, according to Schlafly, evokes abhorrent notions of corruption and double-dealing which are not, he says, “admirable traits.” Rightly so, and that’s the problem. The master wasn’t commending the manager for his underhandedness, rather his market creativity; his resourcefulness.  “Resourceful” is a good Conservative word, and with it in place the parable takes on an entirely new meaning. None, however, of the current editions of the Liberally-skewed “feminist bibles” contain such a powerful Conservative word, and so to counter this deplorable farce Conservapedia started the Conservative Bible Project; an on-going process to simply rewrite the 66 books, 1,189 chapters, 31,102 verses, and 788,280 words both the OT and NT with a Conservative-only lexicon and phrases like “God-fearing” instead of “meek,” and a better Jesus, a Republican Jesus® who doesn’t greet his disciples with the far too feminist, “Peace be with you,” but rather the more Bald Eagle, NRA-Republicanism of, “Peace of mind be with you.” The word “peace,” in fact, is an abomination and Republican Jesus® would never have used it, ever, so Schlafly has removed every entry and replaced it with “tranquility.” And as for the one of the most famous gospel memes, “He who is without sin, let him cast the first stone” (John 7:53-8:11)? That’s just far too liberal for Conservapedia’s edition. It hasn’t been re-written. It’s been removed.

The stated guidelines for the translation include cementing a framework against Liberal, evolutionary and pro-abortion bias, avoiding “gender inclusive” language and other “feminist distortions,” accepting the logic of Hell and Beelzebub, expressing Free Market parables, and, importantly, using robust new conservative terms like “register” rather than “enrol,” and “volunteer” instead of “comrade” which apparently features in what Schlafly describes as “defective translations,” such as the KJV. “Conservative terms, expressing conservative insights,” says Schlafly, “originate at a faster rate, and with much higher quality, than liberal terms.” To back this up, Schlafly insists “Powerful new conservative terms [grow] at a geometric rate, roughly doubling every century. For each new conservative term originating in the 1600s, there are two new terms originating in the 1700s, four new terms in the 1800s, and eight new terms in the 1900s, for a pattern of 1-2-4-8. This demonstrates that the future is increasingly conservative… Conservative triumph over liberalism is thus inevitable.” 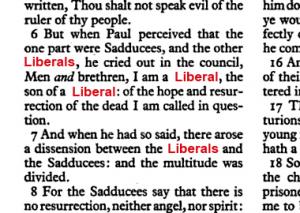 Now Republican Jesus® was also certainly no environmentalist, so, “For God sent not his Son into the world to condemn the world; but to save it” (John 3, 17), Conservapedia has traded “world” for “mankind,” so it’s abundantly clear the True Christian™ savior was not in any way advocating for the good stewardship of the planet. “Fully fed and entertained” reads so much better than “rich” – the fabled job creators – so Matthew 19:24 has been reshaped to read, “It is easier for a camel to pass through the eye of a needle, than for a rich fully fed and entertained man to enter into the kingdom of heaven.” According to Conservapedia, the word, ‘hypocrite,’ is also far too closely associated with Christians and Conservatives, so Jesus no-longer berates the hypocrites in Matthew 7:5, rather the ‘deceivers;’ a word Schlafly insists is a synonym for Liberals. Following suit, the phrase, “The liberal soul shall be made fat: and he that watereth shall be watered also himself” (Proverbs 11:25) is about as ugly a translation ever. “Liberal” is changed to “generous,” as only homeschooled True Christian™ Republicans know the meaning of altruism. On that note, the word “homeschooled” is inserted to describe the method of how Jesus taught his younger disciples. “Media” (excluding Fox News, of course), replaces “false idols,” “Lord of Hosts” is flipped for “Lord of Armies,” “Children of Israel” becomes “Sons of Israel” (because women don’t have rights in the True Christians™ mind), and “Thou shall not kill” is transfigured to read, “Thou shall not murder,” as the death penalty and hunting should never be considered “murder.”

Now, in case you missed it, here it is again: Evangelicals like Schlafly have admitted Christianity is so vaporous, so non-descript, so vague and patently false that anyone can simply write a new version of it. The Inerrant Word of God is unquestionably flawless… until the moment you see a sentence you don’t like, in which case, someone surely got it wrong, or worse, deliberately altered the original just to mess with your head! Now it takes some truly Athenian mental gymnastics to pull something like this off, and even Schlafly says the “The Bible is a collection of the most logical books and letters ever written”… Just not the kind of logic he, and other True Christians™, are fond of.

335 thoughts on “A Better Bible, and a Better Jesus: a Republican Jesus®”